For most things, Twitter is my new word of mouth. Most pop culture I obsess over now initially came to me by way of Twitter — The Rumpus, Buzzfeed, Scandal, Janelle Monáe’s infectious, formidable collaboration with Erykah Badu, “Q.U.E.E.N.” — and sure, for the most part it also serves as my initial source of news. You know, foreign affairs, domestic affairs, polls and politics — grown-up stuff.

I do look into issues further, though. Develop my own opinion. Etc. It takes more than a #trendingtopic to throw me headlong into some kind of obsessive whirlwind. I have standards. For example, I held back from the internet’s Scandal fervor until I eavesdropped on Chimamanda Ngozi Adichie dishing her favorite parts of the show to folks in the signing line at our event with her last month. (I love an acclaimed writer who can talk some serious television with her readers.)

So as much as I love a good recommendation from Twitter, I tend to value the personable touch of good old-fashioned word of mouth. Person to person. With the kind of intentionality that shows you someone thought long and hard about what they’re suggesting you watch or read or listen to. Because you’re you. Not a “follower.”

Back in the spring, my friends (and alma mater) Village Books hosted an event called Bedtime Stories For Grown-Ups, with Portland authors Chuck Palahniuk, Chelsea Cain, and Monica Drake.

I wasn’t there, but I got a text from my friend Jess Tholmer, saying something like, “OMG!! I’m in the same room as Chuck Palahniuk! Anything you want me to tell him?” Probably because she knew I’d read everything he’d written from Fight Club to Pygmy.

I replied, “Tell him I loved Invisible Monsters!!” Because I did. Still do.

So a couple weeks ago, when I was at an event with Mr. Palahniuk, I got in touch with my friend Jess again. “Anything you want me to tell him?” (It’s fun being friends, being each other’s courier of love and admiration to celebrities.)

“Tell him I loved The Stud Book!” I knew the one. It’s a novel with bunnies all over the cover. It’s about babies and motherhood and desire to be a mother. (So, you can imagine, I was really pretty hesitant to go “all the way” with it.) Monica Drake wrote it; Chuck Palahniuk blurbed it. So did Chelsea Cain. A lot of Bedtime Stories For Grown-Ups was to promote Drake’s new book, and it sounded like Chuck was doing a great deal of championing for The Stud Book. 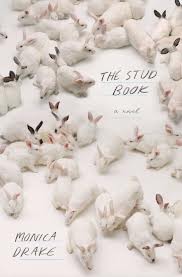 “It’s hilarious! You should read it, too.” Jess told me. And of course I’m liable to do exactly as she says when it comes to funny things, because Jess is a regular and very popular contributor to the pop culture and humor site HelloGiggles. Need I say more?

It didn’t hurt that when I told Chuck Palahniuk all this, he grinned and praised Monica Drake’s work, up and down and up again. The value of a novelist who makes people laugh!

This week I read The Stud Book and laughed and laughed. Sometimes it hurt; parenting ain’t a picnic and neither is pregnancy. Babies terrify me (as anyone who knows me can attest), but from what I gathered from Drake’s superlative novel, they terrify just about every single person on the planet. Just in different ways. Funny ways. Really, really insane ways.

It was an unlikely book for me to enjoy, and maybe that’s why I enjoyed it so much. Everything came as a surprise. And surprise is essential to comedy. (Aisha Tyler said as much at our event with her at Town Hall. We do a lot of events. You’d probably like them.)

But surprise is also essential for readers. We’re not going to learn a bunch of new stuff if we read only the stuff that makes us comfortable. So we keep our ear to the ground — or to The Cloud, if you will — for word of mouth, for what other people are enjoying, especially the ones who’ve proven they deserve a great deal of sway in our lives.

And I won’t rule out Twitter. Because as I recall, I was tweeting with Jess when she told me to read The Stud Book. And when I told her how much I loved it!